So after 3 months our journey along the ancient Silk Road was coming to a close and we reached our final country, Turkey. After some time in Georgia and Armenia which are predominantly Christian countries it was time to head to a country that is probably the most devout Muslim country that we have visited, all the others having had their religion tempered somewhat by the Russians and communism. We arrived in a land where there were Mosques on every corner and the beautiful call to prayer competed from minaret to minaret and floated across the towns and autumn hills.

We made our way along the Black Sea coast before heading up in to the hills to visit the Sumela Monastery, until the early 20th Century this was a predominantly Greek Orthodox area and the monks had built a beautiful structure high in the cliffs reminiscent of the Hanging Buddhist Monastery we had seen all those months ago in China. We hiked up the hill through the damp autumn-coloured forest as the mist floated in the valley and the call to prayer echoed around the hills from a nearby Mosque until the monastery appeared above us complete with beautiful frescoes, sadly defaced by graffiti from Russian and American troops and countless teenagers before anyone saw fit to protect it, but that still doesn’t take away from the beauty of the place. 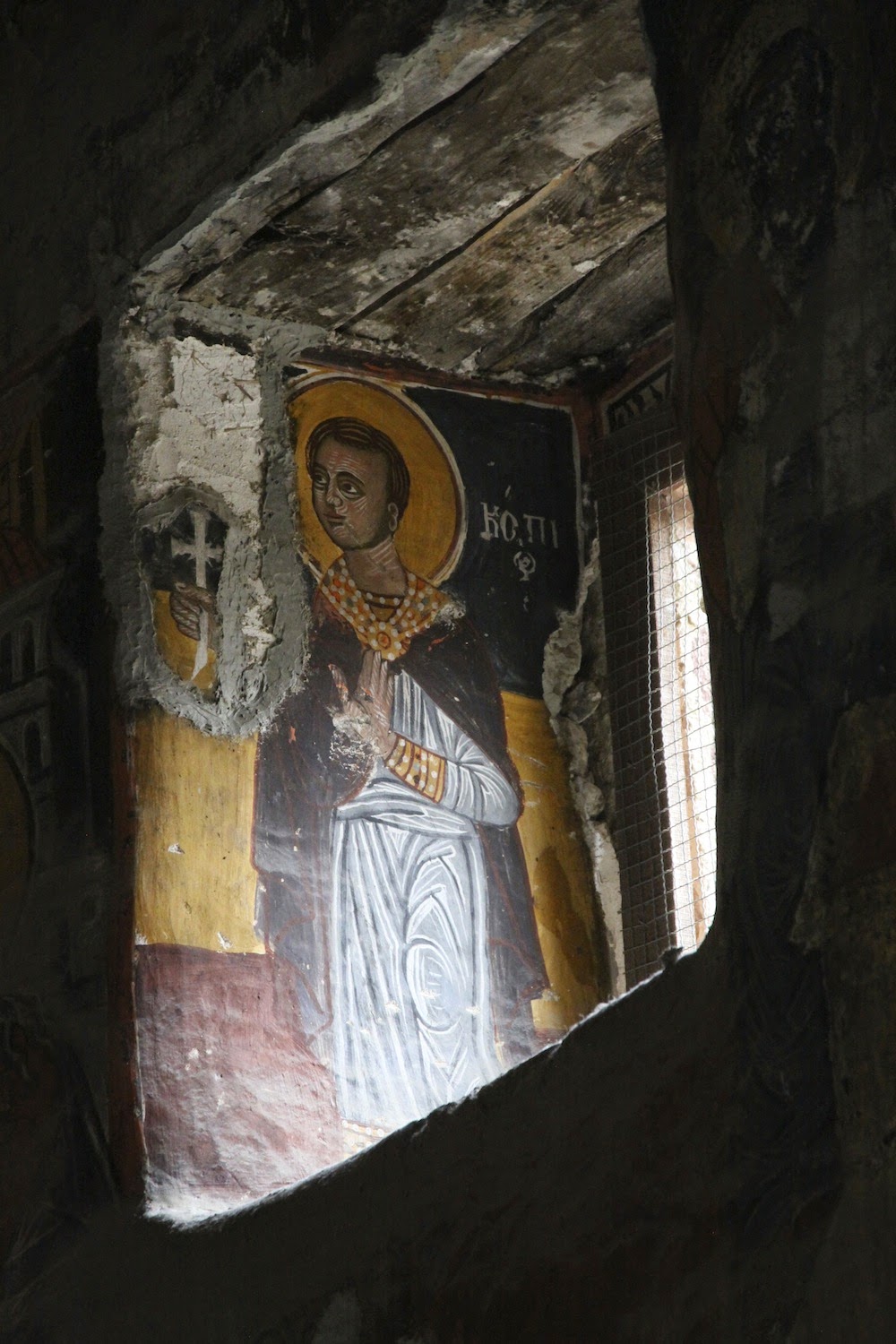 After a night at a cosy log cabin hotel (autumn has well and truly arrived in Turkey and it was much appreciated all round) and a tasty homemade meal of local fish and rice pudding we were off again on a long drive over to the Cappadocia region with a planned stop en route to break it up. Around mid-afternoon we had to undertake a slight change of plans when Penelope our trusty truck decided she needed a bit more TLC so we stopped earlier than planned in a little town called Sebinkarahisar while Simon and Emma went off to to a local workshop. It turned out to be rather a nice little town to explore, no tourists to speak of and the most beautiful call to prayer we heard during our entire time in Turkey, it was like a regular opera performance! It was also home to some very tasty local food, we were all enjoying Turkish cuisine very much!

With Penelope back up and running we completed our journey over to the Cappadocia region with a few minor mechanical adjustments along the way and arrived in the town of Goreme. Cappadocia is one of the biggest tourist attractions in Turkey and deservedly so, its unique set of geological circumstances and history have created the most fairytale-like rock formations of tiny pointy hills and beautiful peaks that throughout its long history have been turned in to cave houses that the ancient travellers coming to the region named ‘fairy chimneys’ as they couldn’t think what else the magical-looking hills could be. We stayed in a cave hotel in the town modernised from a traditional cave house and everyone fell in love with cave-living straight away!


We headed off on a tour of the region with a local guide called Mehmet (the most common boys’ name in Turkey) and we visited viewpoints of the area and heard about the history and geography that created Cappadocia as it is today.

We also visited an underground city, the region is dotted with them, the soft volcanic rock is very easy to carve and excavate hence the cave houses and in times of attack from other tribes or civilisations the people of the region would take cover in this improbable complex of rabbit-warren like homes and tunnels under the earth. We wound our way around getting deeper and deeper in to the ground and were told that what we were seeing was only about 5% of the whole city, it was mind-blowing! 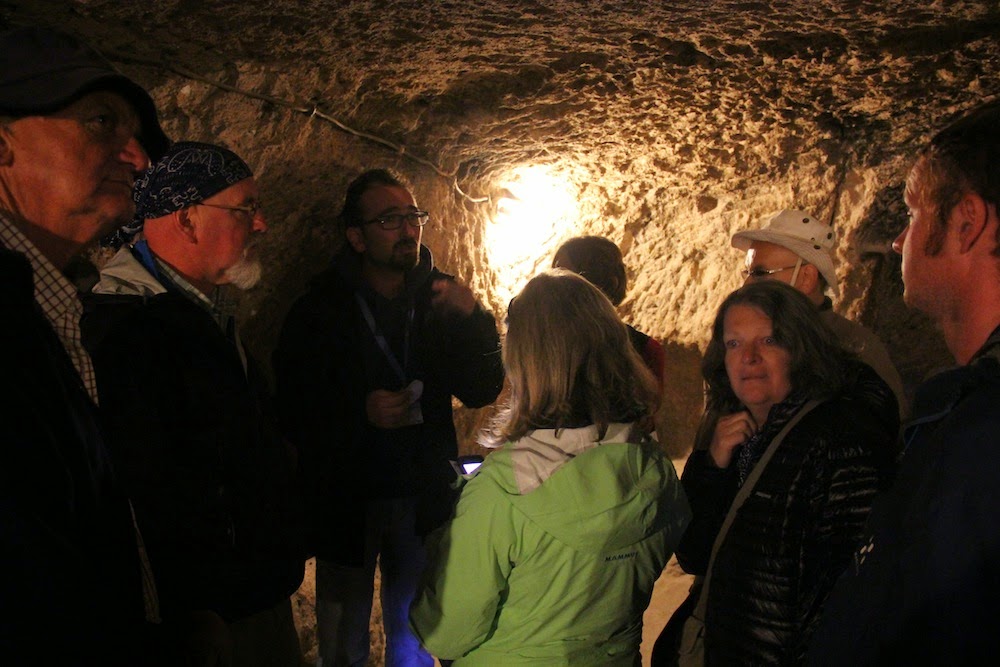 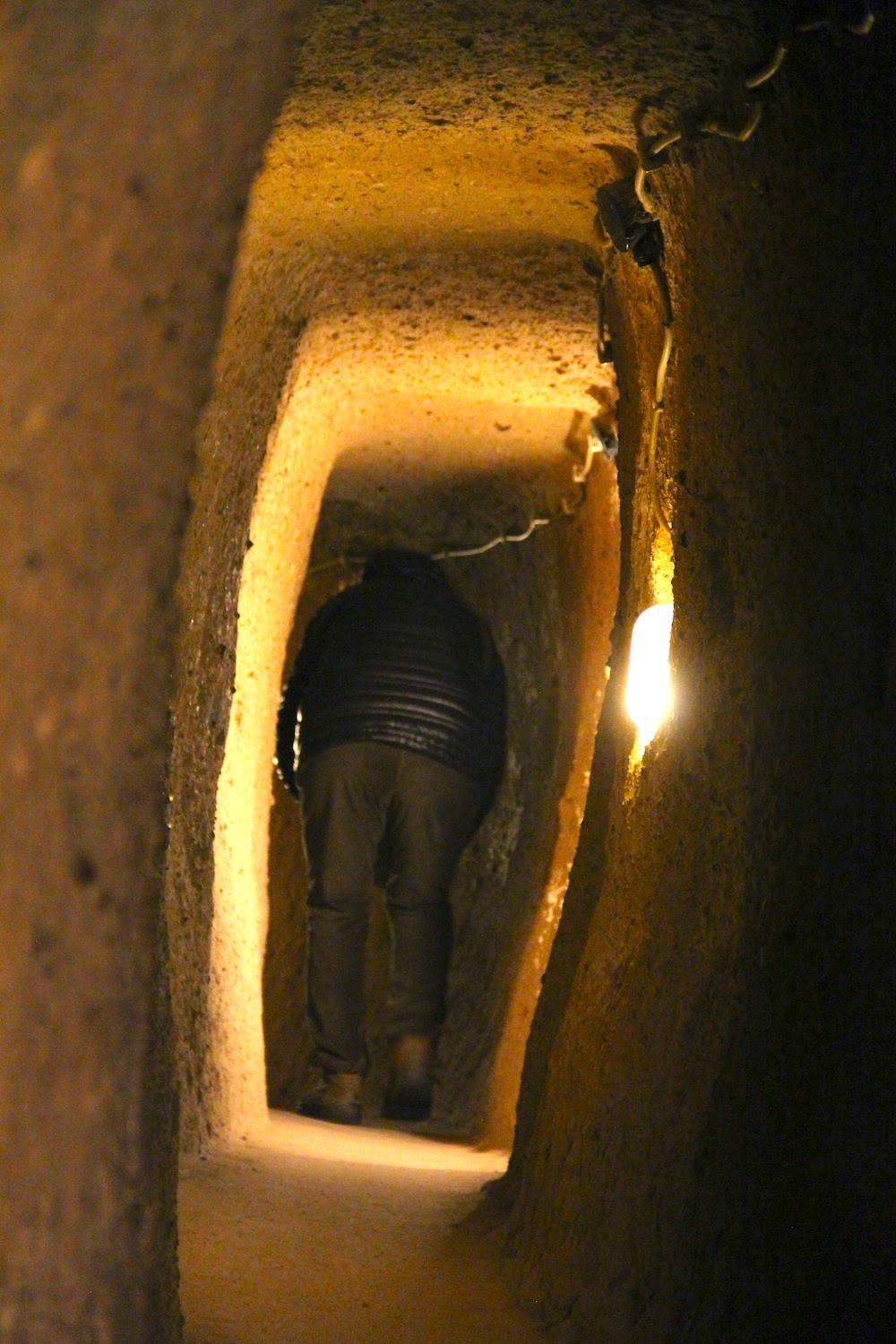 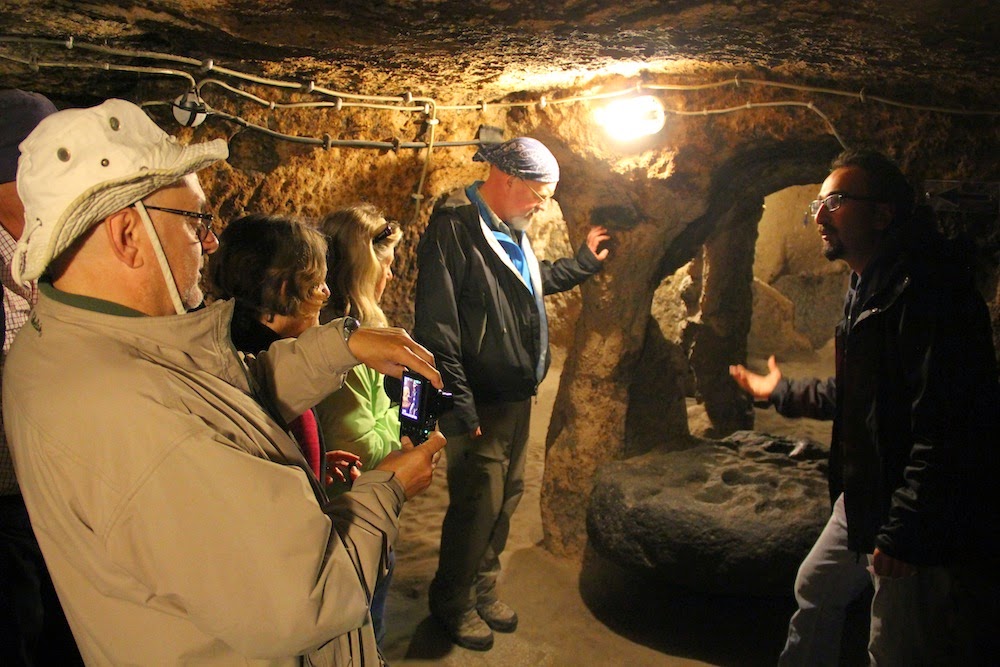 We also had a chance to visit a pottery workshop, something the region is also famous for, and see the artisans producing stunning ceramics by hand. 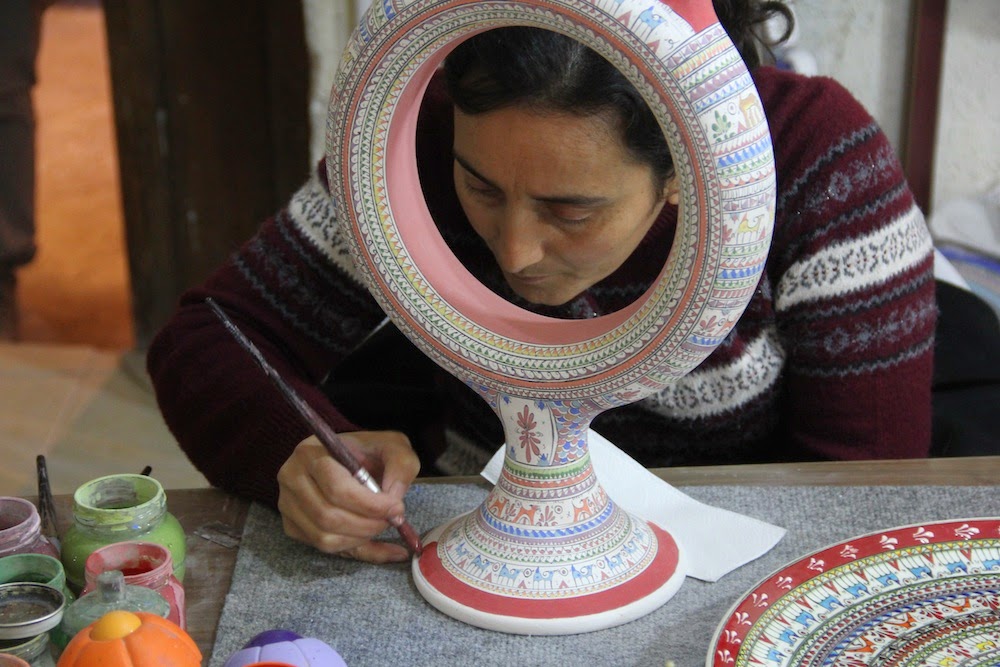 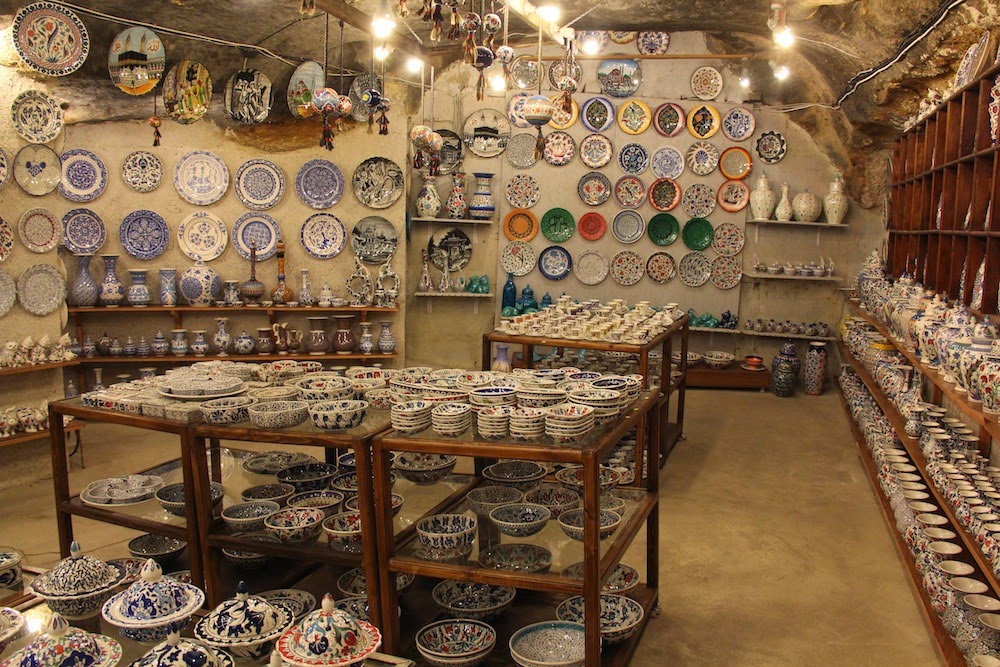 Finally we ended the day with something of a highlight for the entire trip for all involved, a sunset balloon ride over the beautiful Cappadocia landscape along with around 40 other balloons, which only added to the spectacle. Whether we would get to go was all rather ‘up in the air’ (‘scuse the pun!) as the wind was a bit too strong on our first couple of attempts the previous day, but as the sun set on day 2 we were finally able to head for the skies and it was a beautiful, spectacular experience, especially for Keith whose fear of heights took the whole thing to another level of excitement/terror! 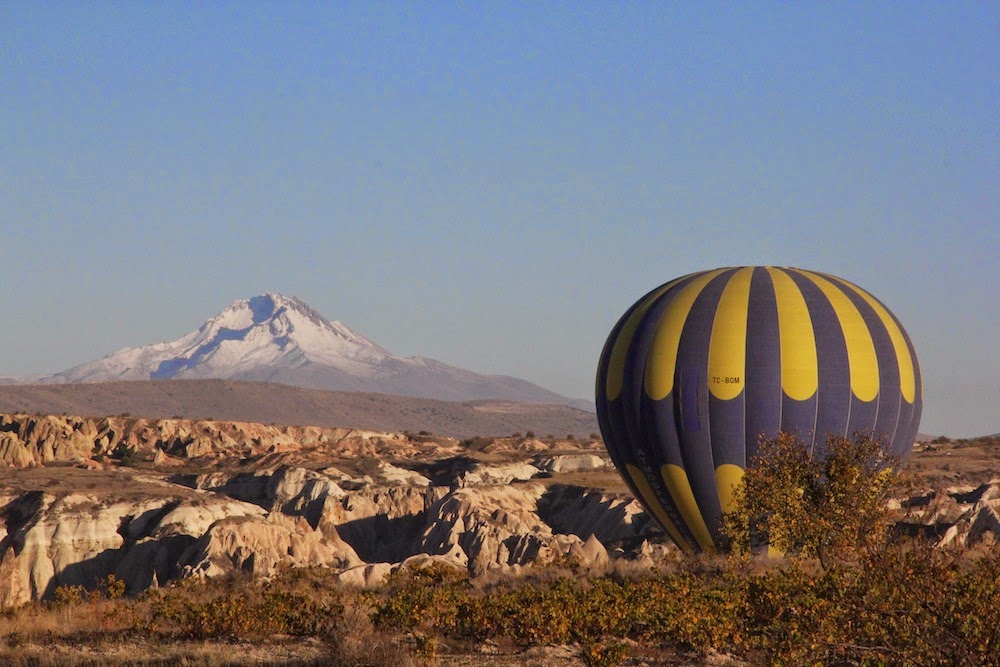 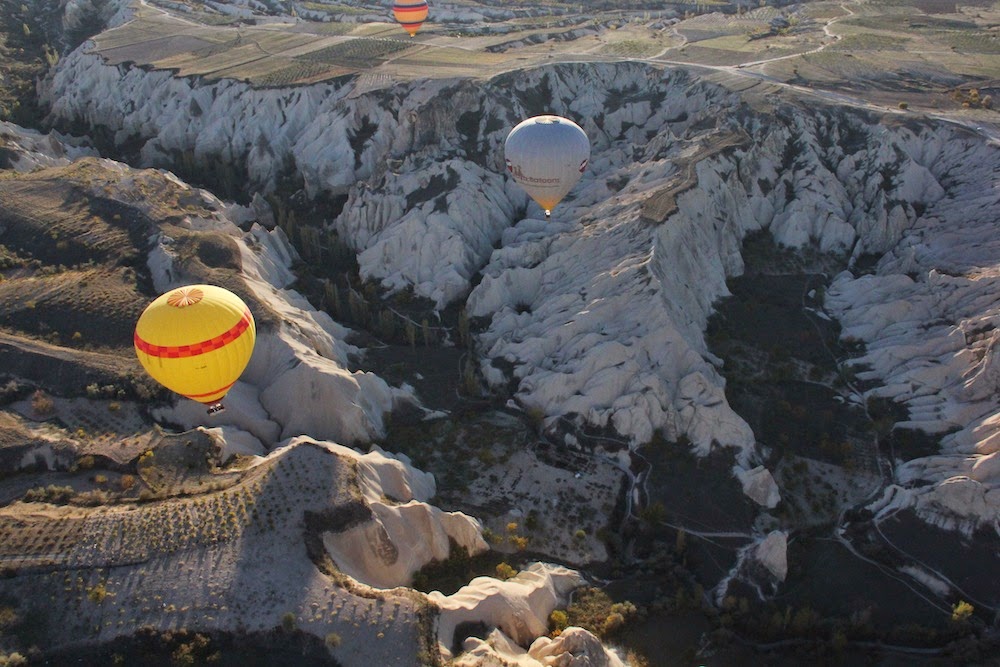 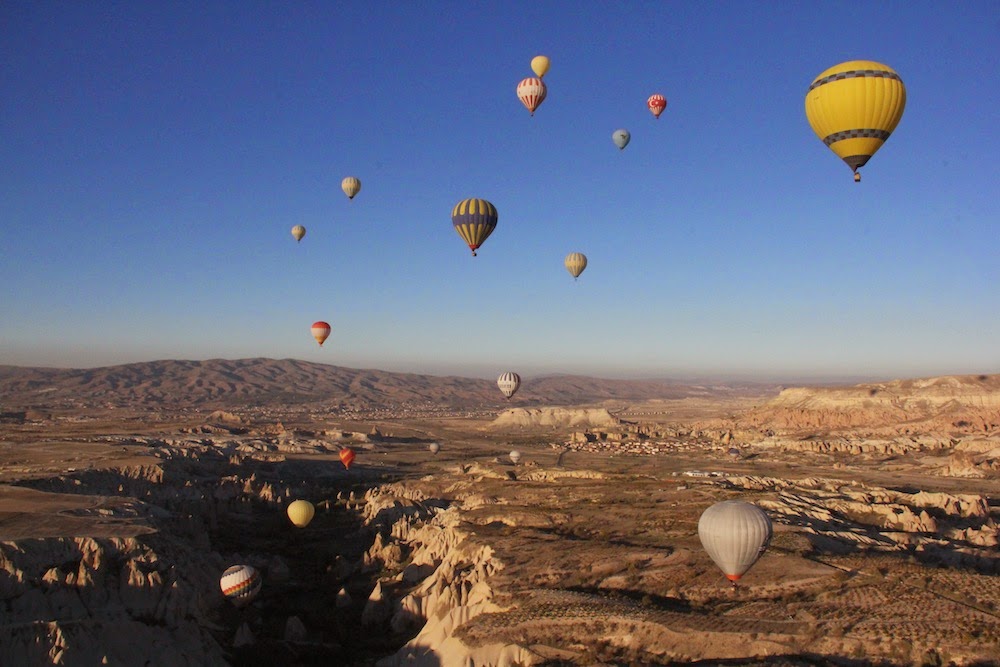 After Goreme it is something of an overland tradition to finish the trip with a mammoth drive all the way to Istanbul, but for this trip we decided to break the drive up with a stop en route and where better than the capital of Turkey, Ankara. Whilst nowhere near as big and impressive as Istanbul which was the ancient capital, the modern capital of Ankara is more of a down to Earth, very Turkish, very friendly city where we caused a bit of a stir amongst the locals who aren’t used to seeing many tourists. We found a beautiful citadel and old town to explore and a brilliant local market which we sadly had no use for with no camping and no cooking left on the trip! 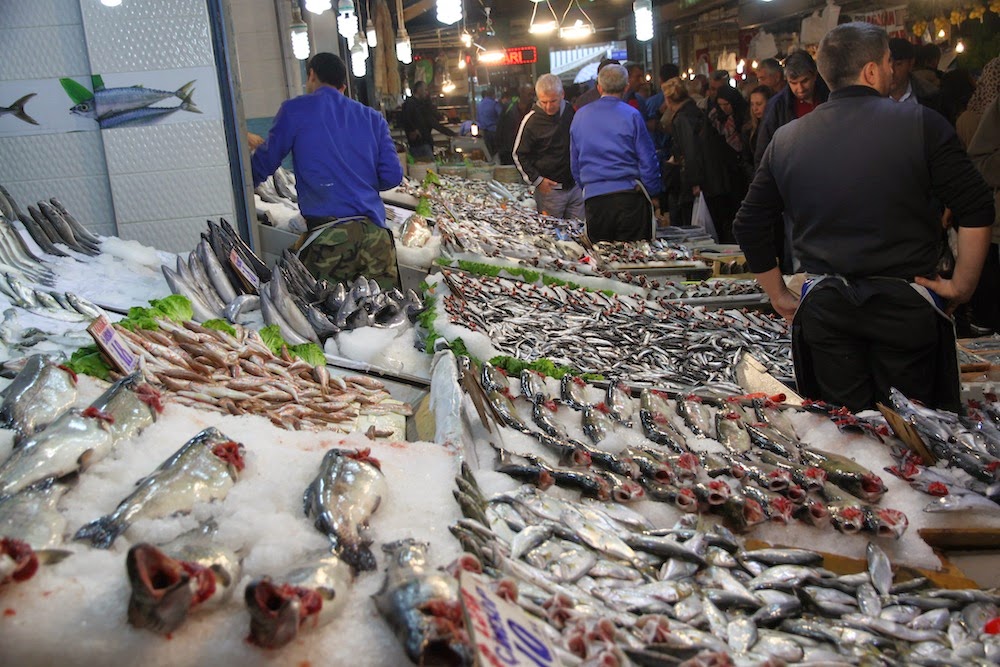 But finally it was time to hit the road one last time and head to our final destination and unofficial end of the Silk Road as it is known today, Istanbul. We wound our way through the hills on some excellent roads jostling with huge numbers of trucks transporting goods between Europe and Asia, some no doubt coming laden with goods from China where it all began. Whilst the Silk Road may be no more, the old trade routes are alive and well as the world gets smaller and continues to buy and sell and trucks replace camels and truckers replace merchants. After over 16000km or 10000 miles we finally crossed the Bosphoros River that marks the official border between Asia and Europe and caught glimpses of the stunning hills of Istanbul and the ancient Hagia Sophia and Blue Mosque and houses clinging to the coast while local fishermen fished off the bridges heavy with traffic and noise and a million smells of spices, kebabs, incense and shisha pipes drifted in to the truck. We had arrived at the city that bridges two great continents and our journey was complete.

But not without a bit of fun to end, being overlanding we like to keep things interesting and being unable to find any taxis who would take us (we have washed recently, honest!) and all being rather laden with extra souvenirs from some of the excellent shopping destinations we have visited along the way, we managed to find a helpful and business-savvy laundry van man who was willing to take us, and all our luggage to our hotel which was hidden away down some very non-truck friendly streets in the ancient Sultanahmet part of Istanbul. Feeling somewhat like illegal refugees we all piled out and checked in to our hotel before dashing out again to make the most of this fantastic city. 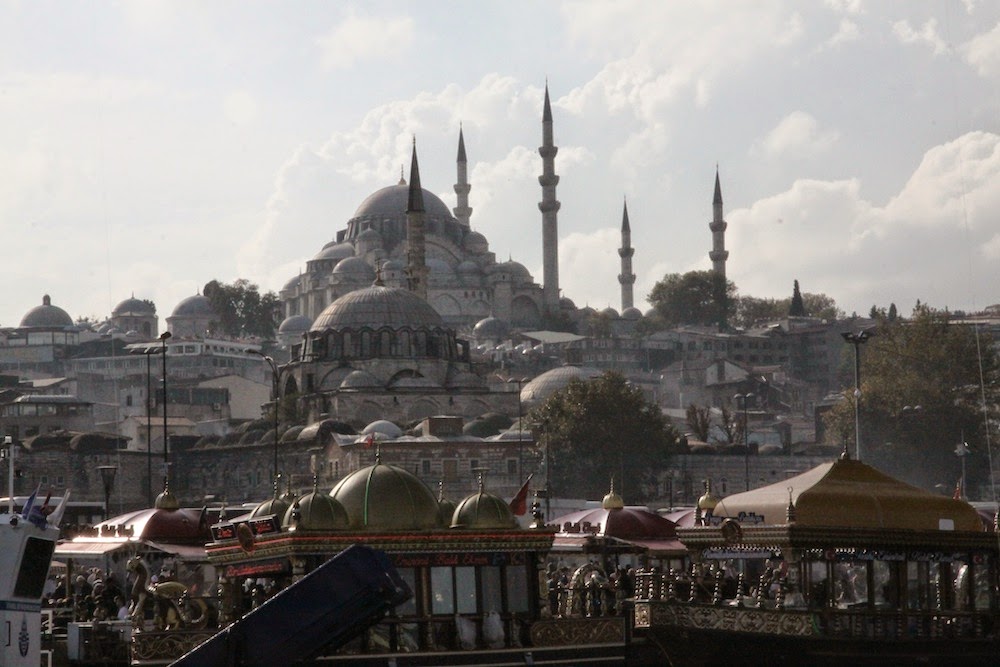 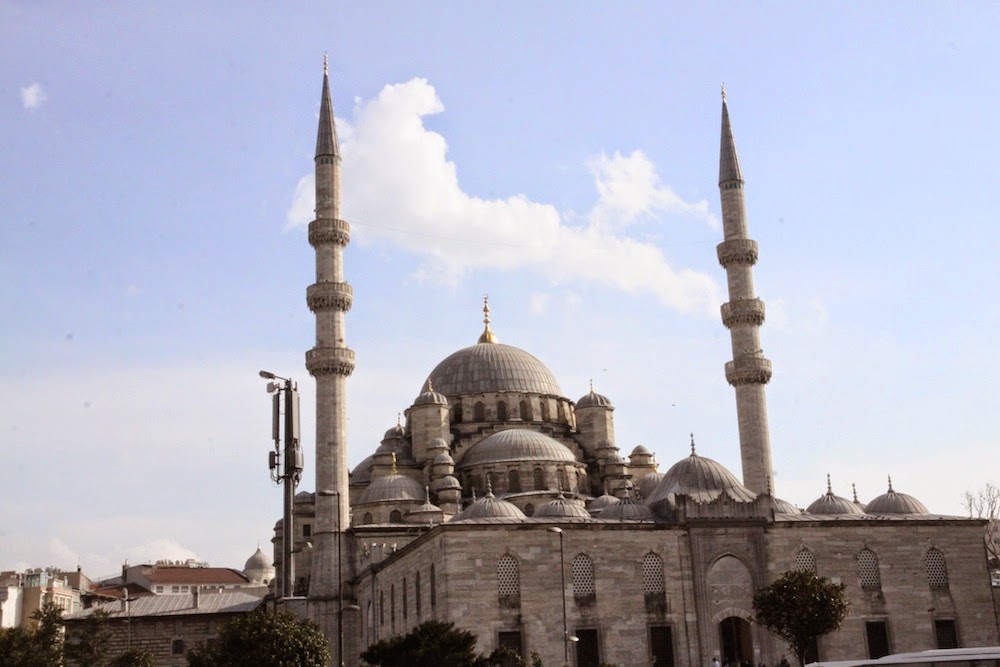 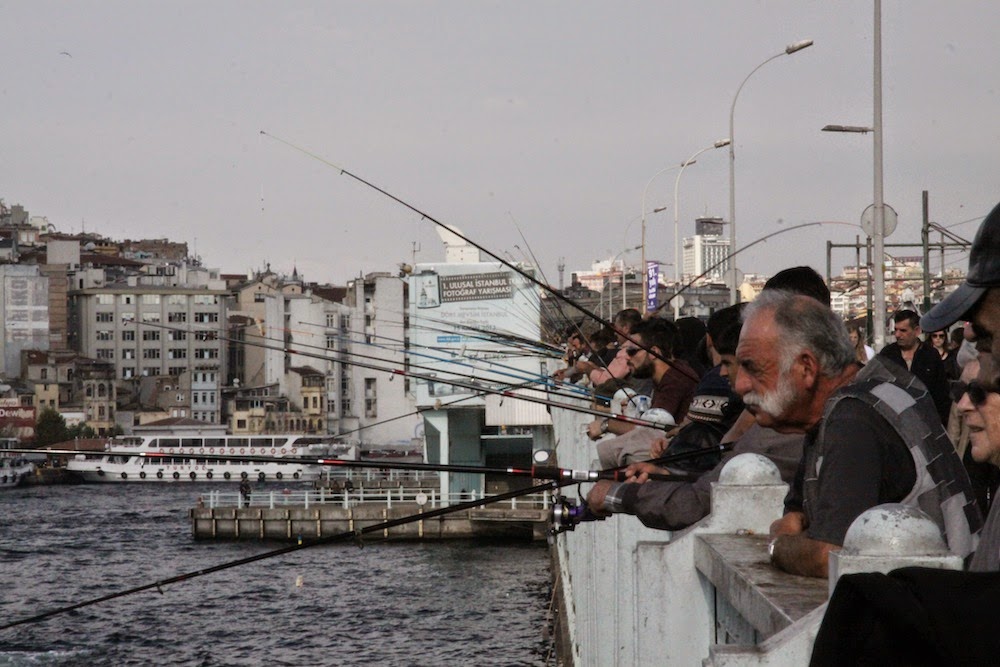 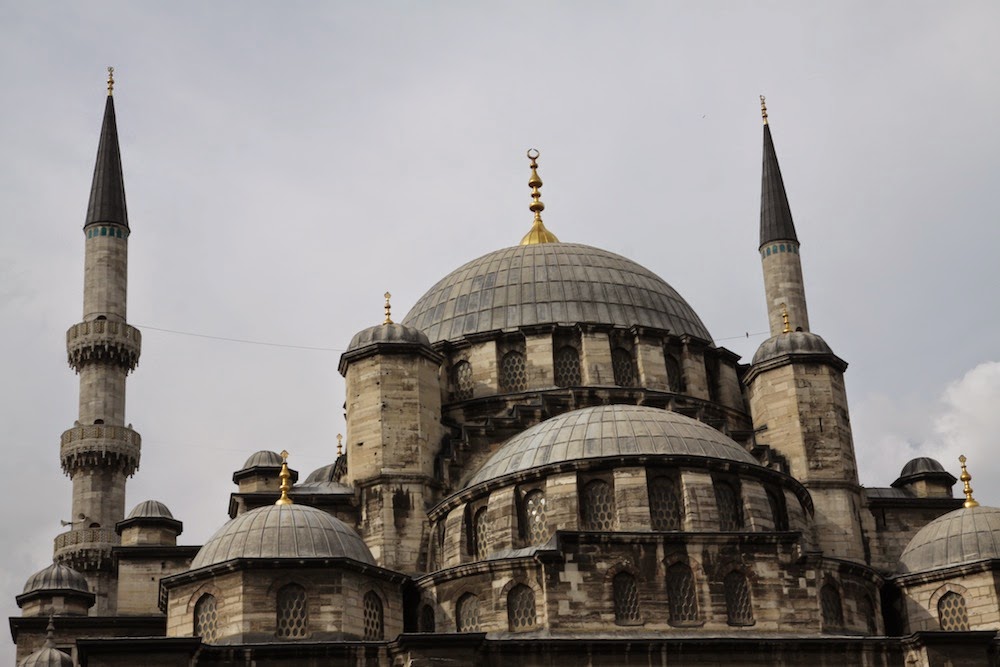 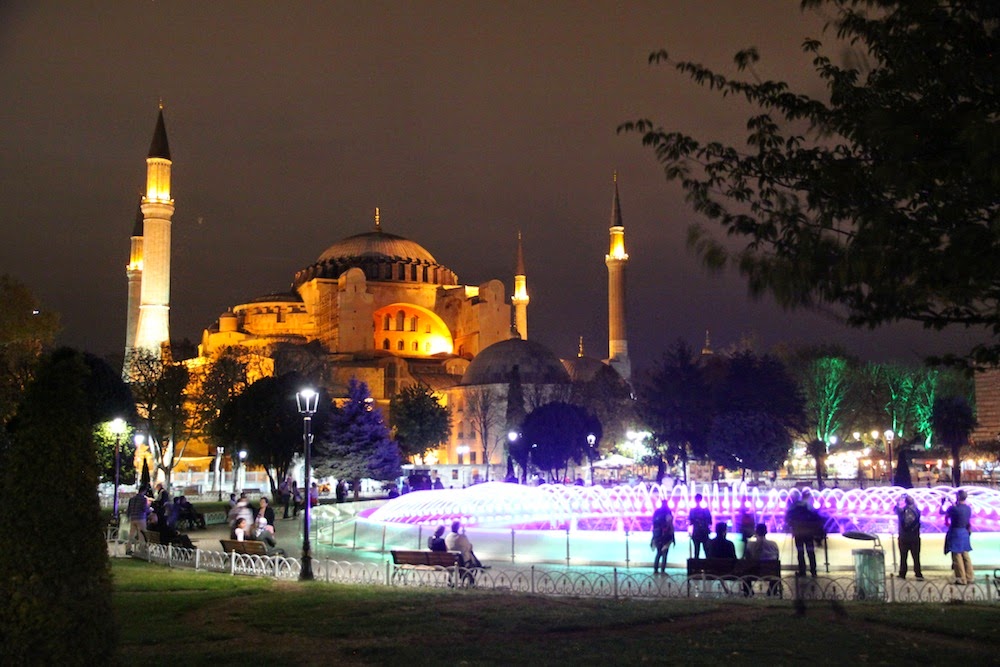 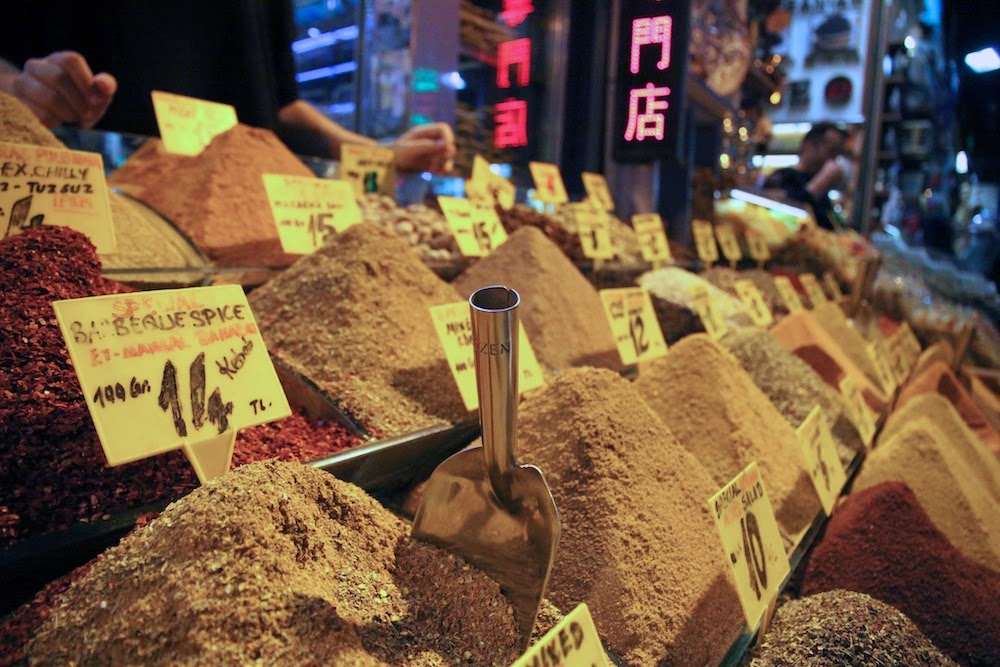 Of course there was time for a final group meal to reminisce about what we’d seen and done, highs and lows, funny stories etc and have some rather tasty Turkish wine and gorgeous Turkish food before all saying sad goodbyes and heading off in separate directions on to the next adventure.

From the crowds, mayhem and amazing food of China, through the grand beauty of Kyrgyzstan, the amazing history of Uzbekistan, the frankly bizarre and brilliant land of Turkmenistan, the glitz and oil-wealth of Azerbaijan, the down to earth warmth and hospitality of Georgia and Armenia through to the vibrance and energy of Turkey it has been an incredible journey through ancient and modern. The Silk Road of the past sings out as you travel along but what is most fascinating and unexpected is what you learn of the world today as you travel this route. The huge swathes of the world that still speak Russian, China’s vast building projects and seemingly endless desire to be bigger and better, the very modern very European countries in the Caucasus, the constant fight between politics and religions that continues through to today. But throughout all this turmoil and upheaval and change in this part of the world what stands out are the people we’ve met along the way, living lives in often difficult and restrictive countries they’ve opened their hearts, arms and doors to us in a way that has humbled us and made us rethink everything we’ve often been told about this part of the world and look at our own lives and homes in a very different way. We go home sad to be leaving but wiser, taking with us some of the beautiful things that the silk road offers, not just scarves, spices, pottery, tapestry and other lovely objects but also memories, and a little more knowledge about another square in the vast patchwork quilt that is the planet we call home - well isn’t that was travelling is all about after all?
Posted by Odyssey Overland at 00:04 1 comment: